Fall has passed and the snow is covering the ground. But tree maintenance can still be done, even if many people think not. This is a time that may be appropriate for tree trimming, pruning or cutting down.

Tree care companies are intensely busy between April and November. However, some work is best done during this period. Companies should be equipped accordingly.

Frozen ground has the advantage of protecting against damage to lawns and gardens where the trees to be cut are located. In addition, the felling of ash trees attacked by the emerald ash borer is ideal in winter. Some cities even require that it be done during this period. Many tree felling operations could be postponed until winter.

When it comes to forestry work, winter is an ideal time for clearing trails and thinning plantations. Frozen forest soil is likely to be significantly less damaged by machinery when logs are removed. Thus, there will be no ruts or they will be more discreet. Even the fauna and flora will be less disturbed by winter work. 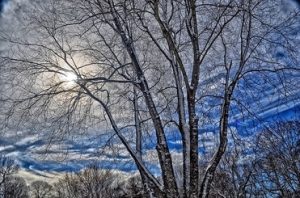 Winter pruning of trees provides the conditions for the specimens to channel their energy more effectively during the spring. However, pruning during the cold season should be done after the coldest weather and when the temperature begins to moderate.

Major pruning may be best done after a tree is about to lose its leaves at the end of the summer if the tree is stressed, has been attacked by disease or has not developed vigorously in the previous season. Sometimes a stressed tree may still need to be pruned in winter. This will be the case if its condition or structural state makes it more vulnerable to the weather. For example, if a storm has already dealt it a serious blow.

Transporting wood becomes easier when there is enough snow on the ground. A sled can be used. However, the company may need to remove too much snow in order to be able to move around better.

Severe winters can cause significant damage to trees. When the cold season promises to be like this, huge trees, those that are structurally weak or that have already been damaged by storms may need pruning to protect them from potential winter breakage.

During the winter, hardwoods are obviously leafless. Thus, their structure is clearly visible. Then, pruning them becomes easier. Prevention is always a good thing for trees. In particular, it can protect them from the onslaught of bad weather. In addition, you can never start too early in the life of a tree specimen.

In addition, winter is a time when tree service companies’ schedules are the least busy. In this case, you may well be able to get a discounted price compared to high traffic periods.

Thanks to emondage Sainte-Foy to have sponsored this article.